He has developed the entirety of his work presenting art interventions in public spaces, primarily murals. Since the beginning of his career in the mid-90s, he has used drawing and painting as the main tools to express his language.

He has developed the entirety of his work presenting art interventions in public spaces, primarily murals. Since the beginning of his career, he has used drawing as the main tool to express his language and his work has been significantly figurative as it has been developed by using public spaces, exclusively, as the canvas. With the streets as a platform for reflection, all his creations have touched as many people as possible, without any sociocultural discrimination.

His language is composed of everyday codes and symbols, based on a collective imagination that delves into narrative forms typical of classical painting, despite raising questions around contemporary art and its relationship with various fields such as architecture, advertising and tourism.

In the recent years, he has participated in numerous exhibitions and performed several interventions around cities such as London, Los Angeles, Tokyo and Vancouver. Some of the most notable exhibition spaces are: the BACC Museum (Bangkok), the Jordan National Gallery of Fine Arts in Amman (Jordan) and the Luis Adelantado Art Gallery in Valencia.

The ephemeral mural “Quisiera subrayar” (I would like to highlight), measuring 14 x 8 m, acrylic over cement, made by the artist at the height of a facade at Calle de San Antón street no.2 for Cáceres Abierto 2017, questions the spaces that Cáceres has dedicated exclusively to art. The ephemeral mural stands out as a counterpoint to the architectonic cult of Cáceres tourism and the lightness of the drawing compared to the heavy and strong monument.

A universal language: the irregular and precarious advertisements that are left in public places of the cities by some of their inhabitants who wish to communicate some service, as well as the companies that can not afford conventional advertising or a billboard; texts and images competing to pop up that were reflected in this ephemeral mural.

The artwork presents a set of concerns and challenges faced by art in the public spaces: the relationship of the art piece with the public, its monumental power, the access to images, the contemplative versus the informative, the current role of the painting, and the limits of individual discourse.

The mural could be observed between from 1 to June 25, 2017 and on the same dates, a drawing made by the artist of the same art piece was also exhibited at the El Brocense Art Gallery. 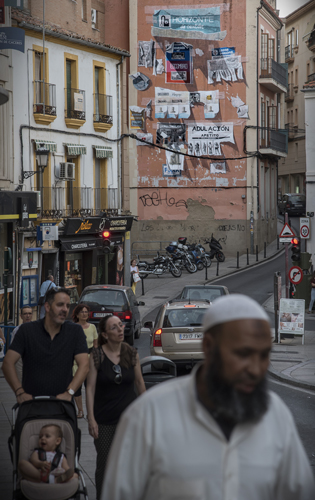 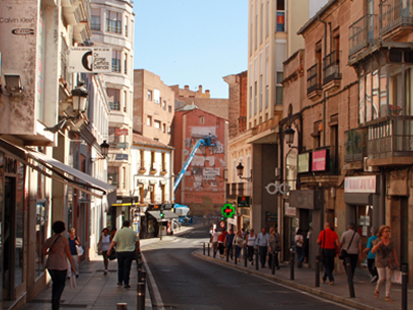 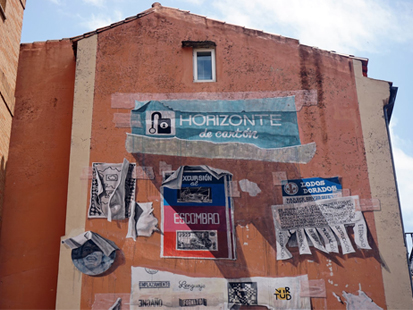 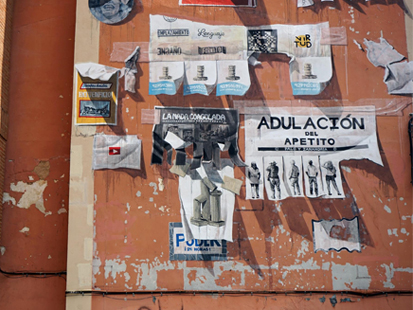