Numerous presentations and panels in an intense programme at the public library.

Today (June 3), we have started the morning at the A. Rodríguez-Moñino/M. Brey Public Library with Marta Pérez Ibáñez (professor at the Nebrija University) and Isidro López-Aparicio (Artist and professor at the University of Granada), who have presented their study on the economic activity of the artists in Spain created over more than two years, through which they have delved into the most remarkable aspects of the economy of Spanish artists and their relationship with the market and, more specifically, how these relationships have evolved since the beginning of the financial crisis of 2008. Through the analysis of extensive data, all the attendees have been able to learn about the present and speculate the future of artists in the context of the administration of art sector in our country.

Their presentation was linked to a panel discussion on best practices in contemporary art in which Isidro himself (representing the Union of Visual Artists’s Associations, UAAV) participated in the session with Isabel Durán (president of the Institute of Contemporary Art, IAC), Nacho Lobato (member of the board of directors of the Association of Visual Artists and Associates of Extremadura, AVAEX) and Ana Aznar (Cultural Observatory of Extremadura). This panel is an end result of the several meetings that were held in the previous months with local and regional cultural groups (artists, gallery owners, collectors, administrators, producers, curators, critics, teachers, researchers, associations, foundations and companies), whose objective was to have them participate in the project, specifically an internal one, not open to the public, created during the preliminary meeting in January 2017and continuing with a formal session organised by the Association of Cultural Administrators of Extremadura (AGCEX)held on March 6 at the Helga de Alvear Foundation Visual Arts Centre.

The afternoon session, also at the Public Library, began with the presentation of Unofficial Tourism and Postal Freek, by Iñaki Larrimbe, with the participation of the authors of innovative and unique alternative tour itineraries prepared for Cáceres Abierto by Fermín Solís (Blind alleys), José Luis Forte (Haunted spaces), María Vaquero (H2O Cáceres), Paula Almonacid (Words) and Sabah Walid (Street furniture and property in a forgetful city). Tete Alejandre (Essential spaces) could not join us since he was at the Cervantes Institute in Madrid, collecting his award from the ENAIRE Foundation.

To conclude the activities at the Library, Marce Solís and the poet-artist Dionisio Cañas, accompanied by several people from the Cáceres Platform for Refugees, had a touching panel discussion about people fleeing the countries with ongoing conflicts of any nature after the projection of the video “I am you/Soy tú” by Dionisio and Carla Fibla, filmed on the Lesbos island. At the end of the intervention, we were deeply moved by Dionisio’s poem, called “Kamel de Irak”, dedicated to a refugee he met in Lesbos.

But this intense day did not end here. Following this intervention, a disseminated collective action, called “Rastros” (Traces) took place in four different locations of the city, which we will tell you about in the next news article. 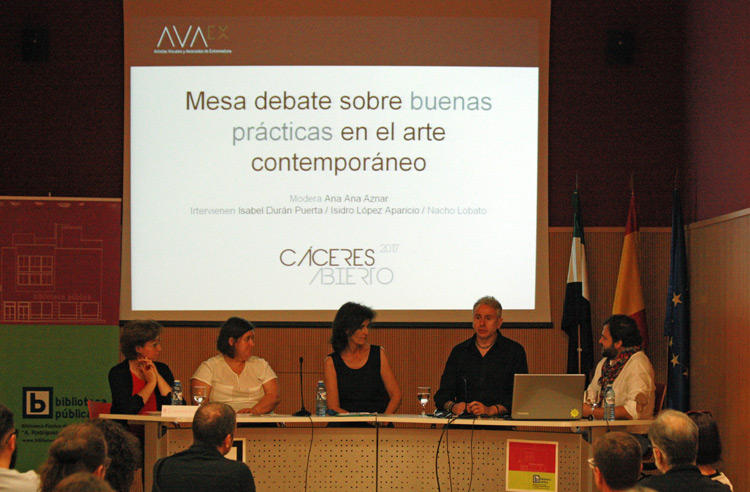 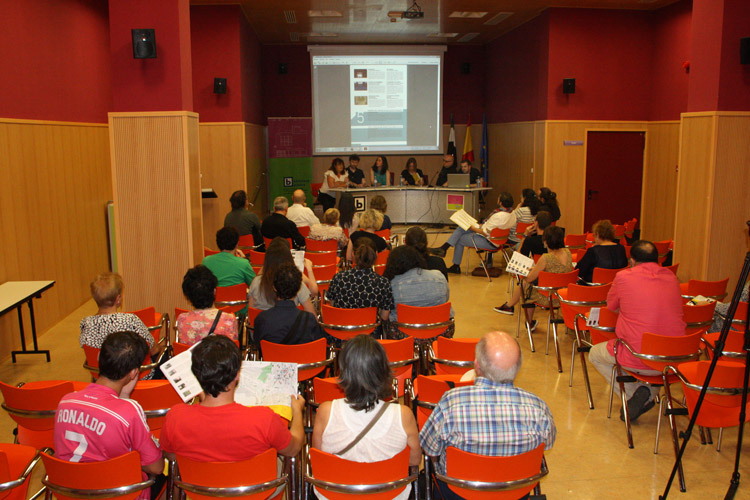 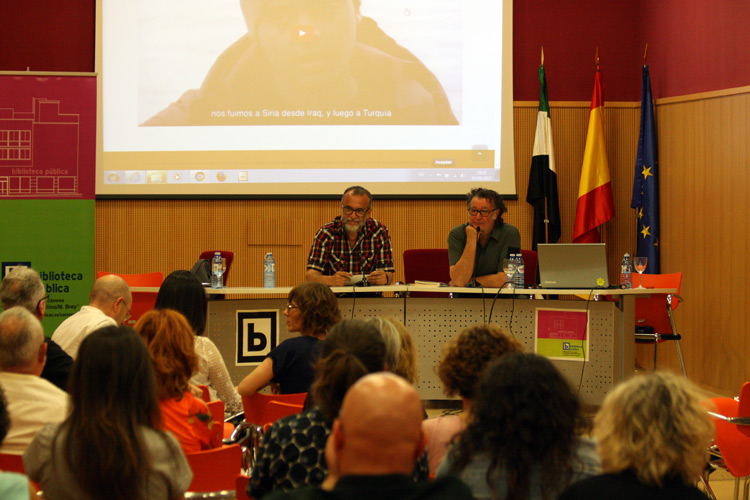