THE COMPLETE PROGRAMME OF CÁCERES ABIERTO 2019 IS NOW AVAILABLE 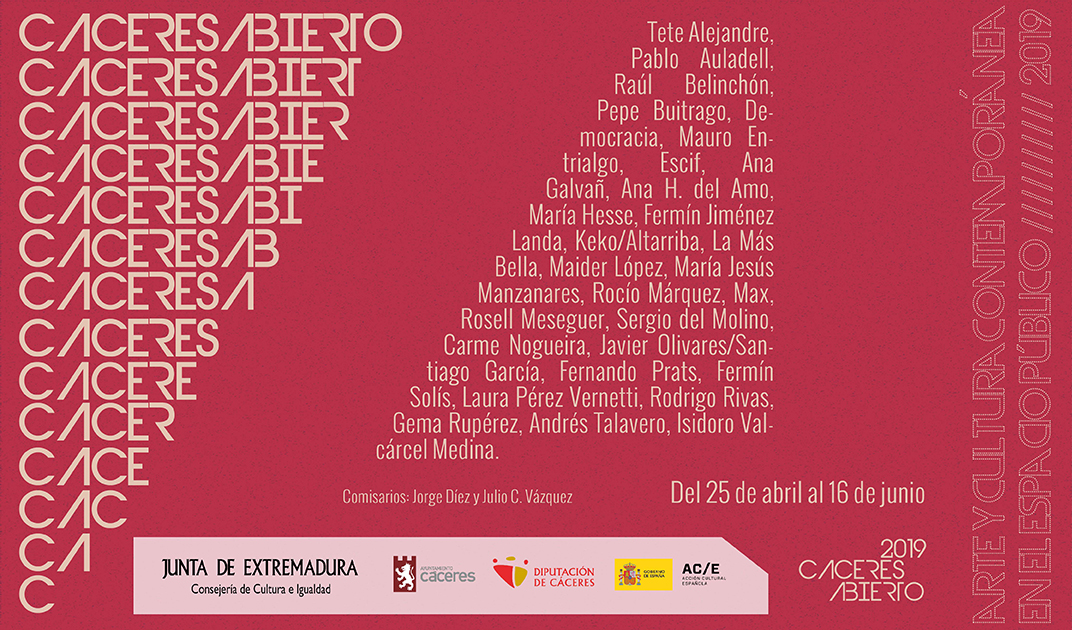 The wait is finally over. Cáceres Abierto 2019will be held between 25 April and 16 June, a second edition in which the city’s historical centre will transform into an art and exhibition centre.

You will find a myriad of experiences throughpresentations, exhibitions, workshops, panels, art interventionsand much more in this fascinating programme curated by Jorge Díez, in association with Julio C. Vázquez,and organised by the Ministry of Culture and Equality of the Regional Government of Extremadura, the City Council and the Provincial Government of Cáceres.

Indulge in more than 30 artworks and artistic activities at the cultural centres of the citysuch as the Cáceres Museum, the Provincial Historical Archive, El Brocense Art Gallery, the Public Library, as well as in other spectacular spaces like the Baluarte de los Pozos and the Parque del Príncipe.

Bringing art away from its conventional spaces, engaging new audiencesand promoting public participationare some of the main objectives of Cáceres Abierto, and especially, of the thirteen art interventionsthat will transform the common spaces during these days.

It will not only be a reflectionon how the public spacesare built and transformed but also on their present and future. The phenomenon of depopulationand myths associated with it will be the main focus of some of the art interventions, as well as of several panelsthat will take place in this edition of Cáceres Abierto. On 25 April, writer and journalist Sergio del Molino and artists Fermín Jiménez Landa, along with Gema Rupérez, will have a panel discussion at the Public Library on Contemporary Art and La España vacía book. On 14 June, during the closing activities, a panel discussion about Artistic processes and good artistic practices in a rural environmentwill take place at the Cáceres Museum.

In this edition, we have combined photography and comics through the exhibition ¿Pintas o Dibujas? Un paseo por el arte a través del cómic(Do you paint or draw? A walk through the art world hand in hand with comics), produced by Acción Cultural Española (AC/E) and curated by Jorge Díez, which is being launched for the first time throughout the country as part of Cáceres Abierto.

On 15 June, a special viewing of the documentary No escribo arte con mayúsculas (I do not write art in capital letters), about the artist Isidoro Valcárcel Medina, winner of Velázquez Prize, will be held at the Vostell Malpartida Museum, followed by a panel discussion. On 25 April, Order, a film by the artist collective Democracia, will be premiered at the Helga de Alvear Foundation Visual Arts Centre.

Workshops, such as the one developed by Carme Nogueirawith children from Pinofranqueado and Ediciones Raras y Variopintas: ¡Edítalo tú mismo!(Unusual and Eclectic Publications: Publish-it-yourself!), by the artist collective, La Más Bella, will conclude the inaugural programme that will close with a concert by the artist Rocío Márquez on Friday, 26 April at the Vostell Malpartida Museum.

A programme that aims to activate reflection on the common space through works of art that surpass the notion of cultural consumption and, on all occasions, consider art as a public service. 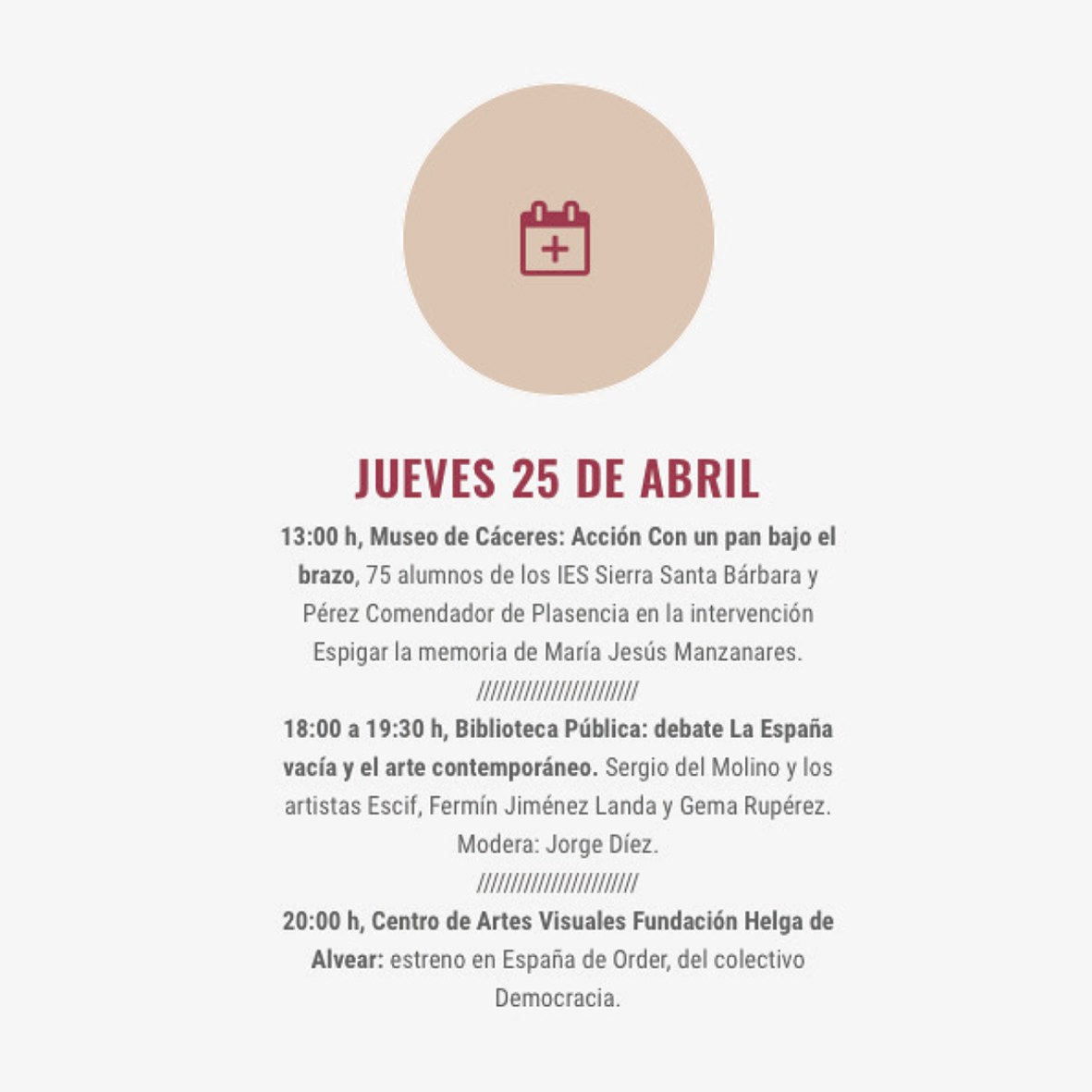 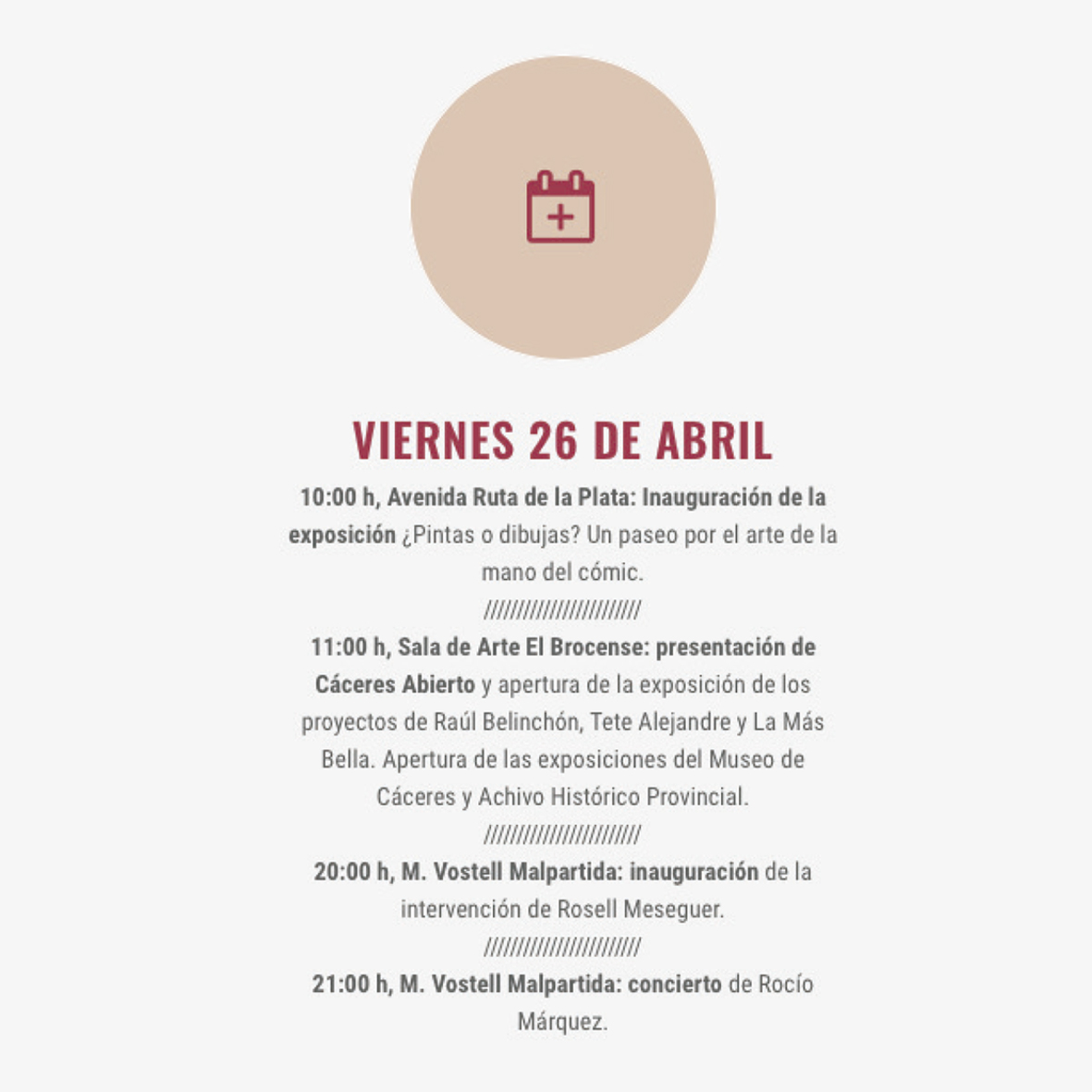 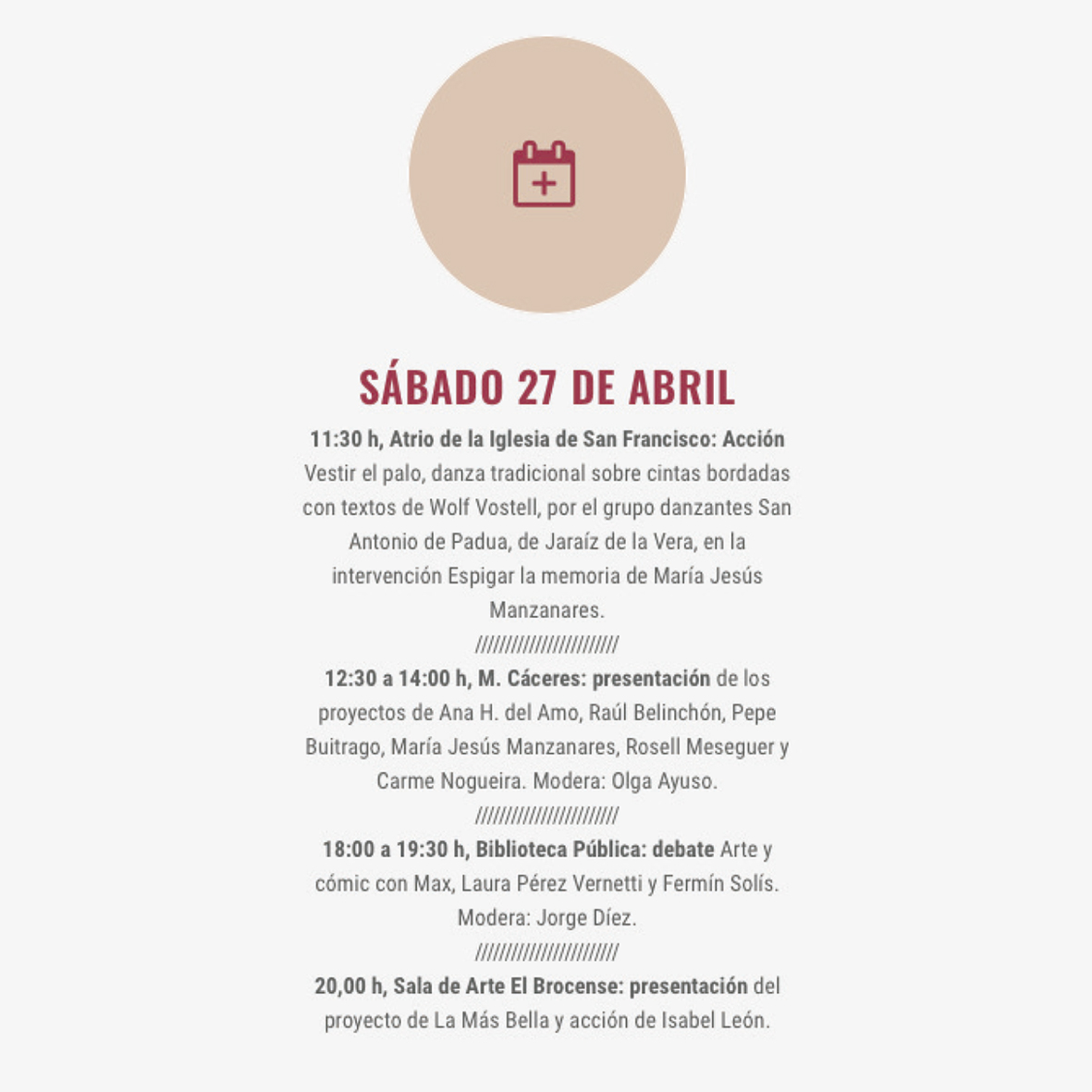